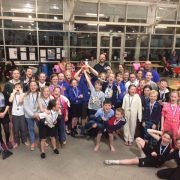 Each club put forward 12 swimmers to take part in a mixture of traditional swimming events followed by a series of fun races.

There was a great atmosphere at the pool and it was superb to see swimmers and parents from all three clubs mingling with each other. All swimmers were awarded a participation medal and the trophy was handed to Gullane who gained the most points on the night.

Everyone thought the event was a huge success and would like to see it repeated next year. Thanks go to the coaching team for organising the event and to the swimmers that took part – you did your club proud 🙂